I swear there will come a day, very soon, when I can’t stop talking about the good the bad and the ugly of BOTH kids, but for now my darling toddler hands me enough laughs to keep me busy for days. She literally does too. Jackson is in a super cute stage. He is still an infant so to speak, and cannot do anything on his own. We are close to rolling over, holding his own bottle, and finding his feet. For now though, he is just full of giggles and smiles and loves to be snuggled. Sleeps like total shit but you can’t look good AND be good at things as well right? The kid can jump hard in his Jolly Jumper though, I will give him that.

Little Miss Hallie, well that is entirely different breed. She is so fun right now, that is for sure. On the verge of her full sentences almost making some sense, full of hugs and kisses, and such a Mama Drama. There are at least 14,000 reasons as to why she breaks down crying each day, not all of them warranted by any means. Takes after her momma though, slightly emotional. With all of this awesomeness comes some huge development milestones. Lets start with the big one. The big, messy, brown one. POTTY TRAINING. I can’t do it. I am lacking serious faith on this. I start out with amazing confidence and an hour later she is in the bath tub and I am day drinking. But if it’s white wine it doesn’t really count right? I mean it’s almost a clear liquid, like water. Everyone needs water.

Since today was one of those days where clearly Hallie’s clothes were made of lava and she had to have them completely off or she would be burnt to death, I thought it was a great opportunity to do some potty training. I can already hear the sanctimommies task-tisking that I should be all ready to go ‘all in’ or not at all. But whatever, thought we would roll with it. Hallie spent a full hour running around naked before it was all I could do to get some ‘training panties’ on her. Following that I found four puddles throughout the house and one very happy-to-be-almost-naked toddler sitting in her own poop. Into the bath we go (after of course hitting up the kitchen for before mentioned glass of ‘water’). For the sake of everyone involved here I probably won’t go into further detail but lets just say it involved me scooping things out of the tub. The results of the afternoon…. probably going to delay potty training a little bit longer. I know she is ready. Just ain’t so sure momma is.

Another dragon that appears to have reared it’s ugly head is the picky toddler tummy dragon. She was choosy before but Hallie’s eating habits have quickly become… well quite frustrating to say the least. If I made it or put ANY effort in whatsoever, you can bet your boots it’s on the floor. Or the wall. Or on me. I just thank my lucky stars that she is obsessed with store bought squeeze pouches. I can take a bit of comfort in the fact that she is eating something. It also helps that the child safety lock on her ‘snack drawer’ is busted and I will often walk into the kitchen stepping all over fruit snacks and goldfish crackers. At least she is eating.

I think my favourite part of our ‘challenges’ right now though are the conversations. Though they are muddled and completely confusing to me, they are sweet as pie. Just like that little devil of mine. It is total gibberish but I know exactly what she is trying to say. The expressions that come along with it are priceless too and always put a smile on my face. Usually fits of laughter too.

Cheers Mommas. Another Monday down, and this one for me, was for the books. 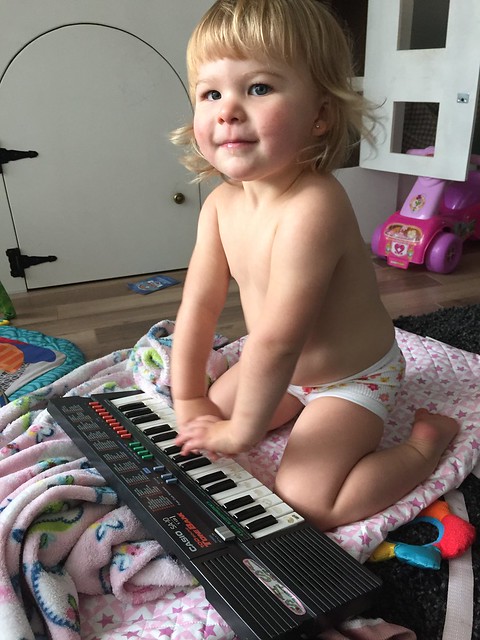